“When the Second World War advanced to Rostov, we were afraid for our lives”

“When the Second World War advanced to Rostov, we were afraid for our lives,” said Lyudmila. “We had no time to think. Our parents gathered grandma, my brother and I, and took us to the train station. They purchased the only tickets available—a roofless train to Tashkent. We evacuated, leaving […]

The Hidden Tunnel in The Bolshaya Bronnaya Synagogue

The Bolshaya Bronnaya Synagogue in Moscow was opened in 1883.  It was a private synagogue founded by a successful businessman, millionaire Lazar Solomonovich Polyakov who was the head of the Jewish community in Moscow. The synagogue was initially an ordinary Moscow house. It was bought by Polakov and reconstructed by the […]

Getzel Lifshitz, a member of the Jewish community in Perm, Russia celebrated his 100th birthday this week. Rabbi Zalman Deutch, The Rabbi of the community (and Chabad shliach) gave him a new pair of #Tefillin as a present for his birthday. В эти дни пермская еврейская община отмечает замечательный праздник: […]

???? What coming together for sport really means! World Cup fans from Israel and Iran unite in Russia!

???? What coming together for sport really means! World Cup fans from Israel and Iran unite in Russia! Source: StandWithUs 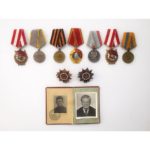 “73 years ago today, Russian soldiers like my beloved grandfather Israel (Z”L), liberated the Jews from the hell of the Holocaust. I’m honored to be the granddaughter of a modern day Maccabbe, who had the vision to send his young wife and toddler son (my father) to the outskirts of […]

The Maryina Roshcha Synagogue is a synagogue in Moscow established in 1925.

The Maryina Roshcha Synagogue is a synagogue in Moscow established in 1925. The building, completed in 1996, replaced the one destroyed by fire in 1993. Since 2000 it’s also a Chabad-Lubavitch Community Center. The Synagogue is part of a large Jewish spiritual center under the auspices of the Moscow Jewish […]

“It was around the time of the First World War,” said Miriam, “when a group of evil bandits came to town.”

“Pogroms were quite common in Zaporozhe, Ukraine during those years. When they entered the synagogue, they found an old, pious-looking man deep in prayer. They grabbed him by his beard and dragged him through the streets of the town.” “Four days later, he died from the wounds. His family […]

“My grandfather Mikhail Lubarsky who fought the nazis in WWII currently lives in Brighton Beach Brooklyn. He’s 94 years old and was at my house this past Thursday for Thanksgiving and sang the yiddish song “Le Chaim”.

My grandfather was born in 1926 in a small Jewish village called Saroki back then it was a territory of Romania which eventually was renamed Moldova and became part of the Soviet Union. When WWII started my grandfather was only 15 when he was given the task of evacuating his […] 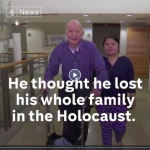 This is the moment a 102-year-old Holocaust survivor meets the nephew he never knew he had.

Eliahu Pietruszka had grown up thinking his whole family had been killed in a Nazi death camp. Source: Channel 4 News

Eliahu Pietruszka shuffled his 102-year-old body through the lobby of his retirement home toward a stranger he had never met and collapsed into him in a teary embrace. Then he kissed both cheeks of his visitor and in a frail, squeaky voice began blurting out greetings in Russian, a language […]

Rina Pearl Zakaj was 10 years old when WWII began. She passed through the concentration camp (Ukraine) and the Warsaw ghetto. After the war, she went on to Israel where she fought for it’s independence. Today, 70 years after the Holocaust, Rina has three grandchildren that all serve in the […]

“My mother was a traditional Jew,” said Natasha. “She’d fast on Yom Kippur, wouldn’t allow bread into our home on Passover, and would pray often.”

But as a young girl, tradition didn’t interest me. I loved music and dreamt of being a famous singer. I wanted to be part of the Soviet cultural scene. My mother tried discouraging me from leaving my roots behind, but I was determined.” “My dream became a reality, singing and […]

“When I arrived from Serbia three years ago, I didn’t speak Russian, but the Jewish school welcomed me with love.”

“The language wasn’t the only thing unfamiliar. I remember the first time I put on Tefillin. ‘What are these boxes,’ I thought to myself. I was clueless!” “They mean a lot more to me today.” Dovid takes out his new Tefillin, a gift from the Rabbi. You can smell the […]

Today, we paid respect to the 27,000 people murdered 75 years ago at Zmievskaya Balka in Rostov.

The Nazis mercilessly butchered all of Rostov’s Jews, including young children and the elderly, hoping to leave nothing of our heritage. They tried to extinguish the flame of Judaism in our city, but they didn’t succeed. Today, 75 years later, we held a March of the Living, followed by a […]

My wife died this past September. We were married for 59 years. I survived three heart attacks, but losing Alla was unbearable. I laid my feet down, never intending to use them again. I had given up. Then one day a few teens from our community came knocking on my […] 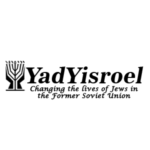 Belarus is a country of eastern Europe. Until it became independent in 1991, Belarus, formerly known as Belarussia or White Russia, was the smallest of the three Slavic republics included in the Soviet Union (the larger two being Russia and Ukraine). Before the Holocaust, Belarus had a population of 1,000,000 Jews. […]

“My husband inspires me to be closer to Hashem”

“On our Honeymoon he would wake up and go straight to the dock to do Tefillin everyday!! His name is Sender Michaelov. His family and him had to flee Russia before being prosecuted for being Jewish in 1990. It was illegal to believe in Hashem and practice a religion! They […]