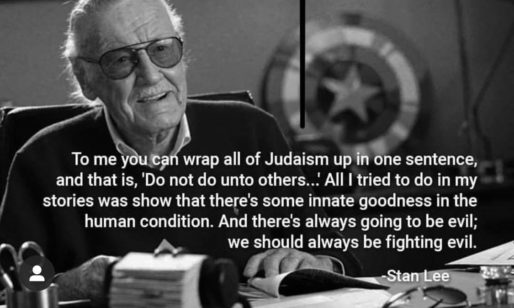 Remembering: Stan Lee
Stan Lee, Marvel comics’ real-life Jewish superhero died one year ago today, November 12th, 2018 at age 95. Lee started Marvel with Jack Kirby in 1961 with The Fantastic Four. He went on to create Spider-Man, Black Panther, The Incredible Hulk, X-Men, Iron Man and The Avengers.
Stanley Martin Lieber was born on December 28, 1922, in Manhattan, New York City, in the apartment of his Romanian-born Jewish immigrant parents, Celia and Jack Lieber. NBC News correspondent Benjy Sarlin described Lee as “a big source of cultural pride as a kid, both as a New Yorker and as a Jew. It meant a lot to me that so many great comic creators had similar biographies to my grandparents and that their world was reflected in the work itself.”
May his memory be a blessing.