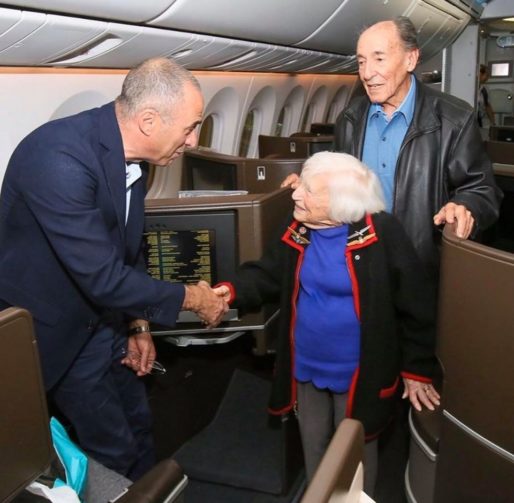 EL AL CEO Gonen Usishkin welcomed 99-year-old Holocaust survivor Marthe Cohn and her husband Major Cohn to Israel. It is Marthe’s first time in Israel! She’s visiting for the premiere of a film, which tells the story of her life and is screening at the Haifa Film Festival. Marthe Cohn (née Hoffnung) was born on April 13, 1920 to an Orthodox Jewish family in Metz, France. During the war, the Hoffnungs were very involved in the resistance. Marthe’s sister Stephanie was sent to Auschwitz where she was murdered, and the rest of the family was forced to flee to the south of France. After the liberation of Paris in November 1944, Cohn enlisted in the French Army and was recruited as a member of the Intelligence Service. Her nursing background, ability to speak fluent German, as well as her blonde hair and blue eyes made her a perfect candidate for undercover work. After many failed attempts, she daringly crossed the border into Germany where she posed as a German nurse and collected intelligence on Nazi troop movements and locations. Today, Marthe lives in California and travels around the world to share her story. What a hero!