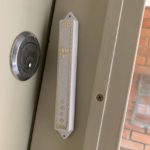 “A congregant sent this to me to check if they had put the Mezuzah back up correctly after it had “fallen”. I immediately noticed the despicable engravement next to the holy Mezuah. My grandparents lost their entire family in Nazi Germany, today they have over 100 descendants who devote their […]

Lena Goldstein was a 20-year-old student when Nazi Germany invaded Poland in September 1939. Confined to the Warsaw Ghetto, where 400,000-plus Jews were forced to live, by early 1943 she was one of just 35,000 still alive. Last week, Lena celebrated her 100th birthday in Sydney Australia. #MazalTov Source: World […]

The Central Synagogue of Bondi Junction

The Central Synagogue of Bondi Junction, Sydney, is the largest synagogue in the Southern hemisphere and has the largest Jewish congregation in Australasia. In November 1913, on the corner of Dowling and Napier Streets in the Sydney suburb of Paddington, the first Central Synagogue was founded with 150 members. In […]

The Great Synagogue of Sydney

The Great Synagogue of Sydney (known in Hebrew as Beth Yisrael) is one of Sydney’s most beautiful, fascinating and historic heritage buildings. The Synagogue has stood on its present site for well over a hundred years, since 1878, but the congregation itself has a history going back at least fifty […]