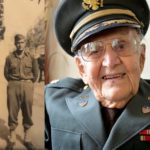 This is Lieutenant Colonel Sam Sachs, a Jewish-American WWII veteran who survived the invasion of Normandy (D-Day) and helped liberate a concentration camp in Nazi Germany. Born in North Dakota in 1915, Sachs served as a U.S. Army officer with the 325th Glider Infantry, 82nd Airborne Division. On June 6, […]

“My name is Sholom Neistein and I’m a Jewish Lieutenant in the US Army. This was Pesach last year when I made a Passover Seder for Soldiers.”

They say a picture is worth a thousand words, but I think this one is worth about six million.

“In the center of this photo is my amazing grandfather, whose family left Poland for New York when he was ten years old. At 21, he was drafted into the Army where he fought in every major battle of World War II – with the exception of D-Day. His service […]

And they’re off! Good luck Lone Soldiers on your draft! Israel Defense Forces

Yoni Netanyahu (pictured with wife) was born in #NYC. He was enrolled at #Harvard University, and made the Dean’s List in his first year. Feeling restless being away from #Israel, Yoni returned to his homeland, went to the #army and became commander of the most elite unit. He was killed in action on July 4, 1976, […]