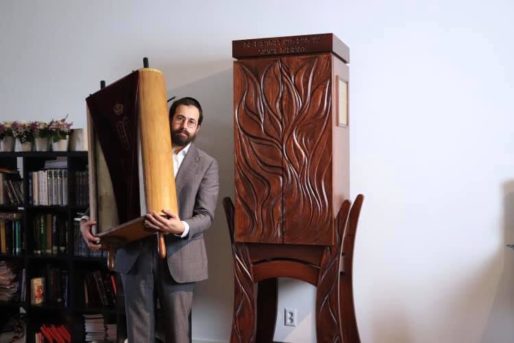 “The Torah Scroll in this picture, belonged to a Northern European Jewish community that perished during the Holocaust and has been roaming through Europe ever since. Next week’s Rosh Hashana and Yom Kipur service will be the first time in 75 years that this Torah will be used. The scroll, in 1972 sold by an antiquarian to a Dutch Christian Congregation (that had purchased it as a gift for their Pastor) had a wooden case build around it, so all visitors could have a glimpse. The heirs reached out to me two weeks ago as they wanted to return the Sefer Torah to a Jewish environment. This morning I drove down to the South of Holland, and after signing all of the required documents, we covered the Torah with a Tallit. This coming Kol Nidre service we will open the Aron hakodesh at our synagogue, Chabad of Amsterdam South, and look at this Sefer Torah. I will have in mind those to whom the Torah originally belonged, but did not survive and thus could not reclaim it. After the holidays we will work on having this unique scroll restored.” – @yankijacobs