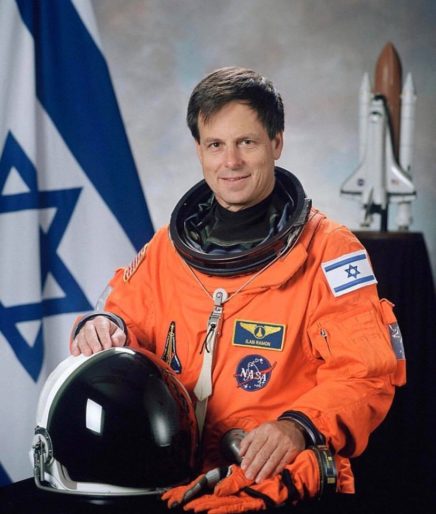 “From space, Israel looks just like it is: very small and very beautiful” – Ilan Ramon
17 years ago on February 1st 2003, we lost Col. Ilan Ramon, an Israeli Air Force fighter pilot & Israel’s 1st astronaut for NASA. Ramon was the space shuttle payload specialist of STS-107, the fatal mission of Columbia, in which he and 6 other crew members were killed in the re-entry accident.
Ilan Ramon, Born Ilan Wolferman, was born in Israel on June 20, 1954. Ramon, whose mother and grandmother were survivors of Auschwitz, was asked by the American Society for Yad Vashem, to take an item from Yad Vashem: World Holocaust Center, Jerusalem aboard STS-107. Ramon carried with him a pencil sketch, Moon Landscape, drawn by 16-year-old Petr Ginz, who died in Auschwitz. The drawing reflects how Petr believed the Earth would look from the Moon. It also reveals a talented boy with a bright imagination full of hopes and dreams for the future. Ginz was murdered in the gas chambers of Auschwitz at age 16. Coincidentally, Ramon passed away on Petr’s birthday, February 1st.
Ramon also took with him a microfiche copy of the Torah given to him by Israeli president Moshe Katsav and a miniature Torah scroll (from the Holocaust) that was given him by Prof. Yehoyachin Yosef, a Bergen Belsen survivor.
Although considered a secular Jew, Ramon reportedly sought to follow Jewish observances while in orbit. He was the first spaceflight participant to request kosher food.
At 48, he was the oldest member of the crew. Ramon is the only foreign recipient of the United States Congressional Space Medal of Honor, which he was awarded posthumously.