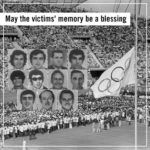 Munich massacre, Palestinian terrorist attack on Israeli Olympic team members at the 1972 Summer Games in Munich. The Munich Games marked the first return of the Olympics to a German city since the 1936 Games in Berlin. Adolf Hitler’s use of those Games as a platform for the propagation of […]

HAPPY CHANUKAH From The Israeli Air Force: “In honor of the 5th candle, here is our Human-Menorah”