Ohel Ya’akov Synagogue located in Zikhron Ya’akov, a town in the Haifa District of Israel, was established in 1886 by Baron Edmond James de Rothschild.

Rothschild commissioned the construction of the synagogue in memory of his father Jacob Mayer de Rothschild. It was completed in 1884.

The synagogue was built during the Ottoman regime in Israel; the Ottomans had a law about destroying housing: It is not permitted to destroy a building if the roof is built. The Jewish settlement took advantage of this law and in the middle of the night crept out and built the synagogue.

Every time the officers came over and asked what they were building the responded that they are building a stable. At the end, over one night they built the roof and opened the synagogue to the Ottoman’s astonishment that instead of a stable the built a marvelous synagogue.

The synagogue, which has a large main section for men and a second-floor, wraparound women’s section, has a Holy Ark made of white marble and marble interior walls. 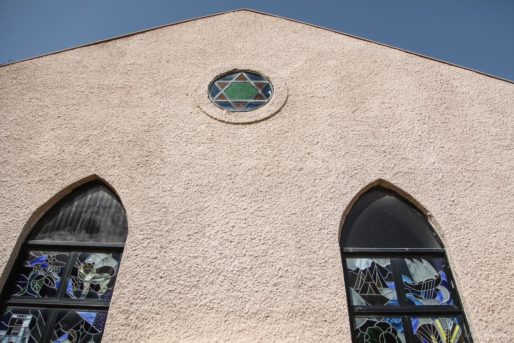