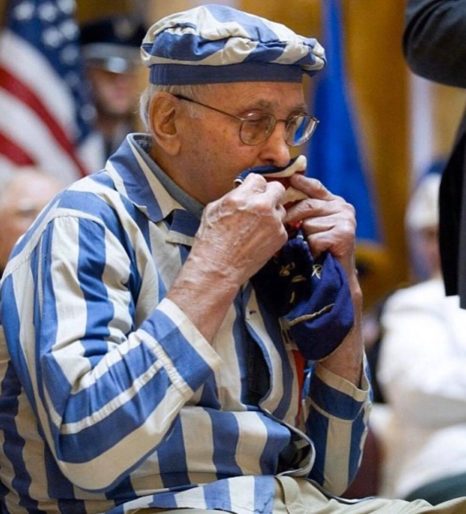 Holocaust survivor Steve Ross (né Szmulek Rozental) was born in 1931 near Łódź, Poland. He spent five years in ten different concentration camps, including Budzyń, Auschwitz, and Dachau. He survived medical experiments, starvation, sexual abuse, and brutal beatings on a daily basis. When Ross was liberated from Dachau in April 1945, he was 14 years old and weighed 50 lbs. Among the American troops who liberated the camp was Lt. Steve Sattler, whose act of kindness restored Ross’s hope in humanity, even after everything he had been through. When Lt. Sattler saw Ross, he jumped down from atop his tank, hugged the emaciated child, and shared his food rations with him. He also gave the boy a handkerchief decorated with the American flag. After the war, Ross settled in the Boston area where he became a social worker and spent his life helping at-risk youth. When speaking to students about his experience, he would carefully unfurl the American flag handkerchief, and share how one small act of kindness can transform a life. Photo: Steve Ross holding handkerchief The Boston Globe via Getty Images