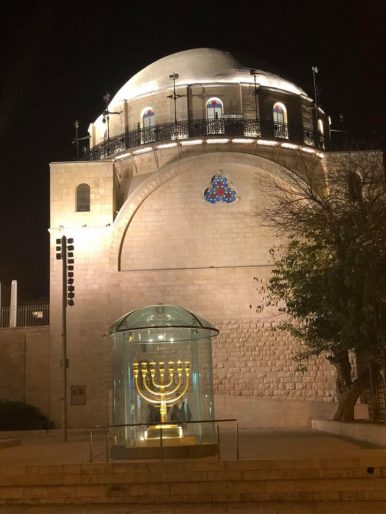 I am in Israel right now for my father’s yartzeit, he is buried here and tomorrow night will mark 6 years since his passing. Humans of Judaism is a project that I started in memory of my father during my year of mourning.
My family has great history in Jerusalem. My grandmother (my mother’s mother) was born in the old city in 1920. She was 7th generation yerushalmi (living in Jerusalem), more specifically 7th generation living in the old city. Last week would have been her 99th birthday and this past Shabbat would be 99 years since she was given her name in this very Shul! Today I was fortunate to visit the synagogue as it has been rebuilt and restored over the years. Standing here in the place where she was named, ‘Basha Miriam’. Shortly after she was born our family had to leave the old city for their own safety. They moved to New York in the 1920’s. Here I stand today, in the same footsteps of my family history, enjoying some of life’s greatest treasures.