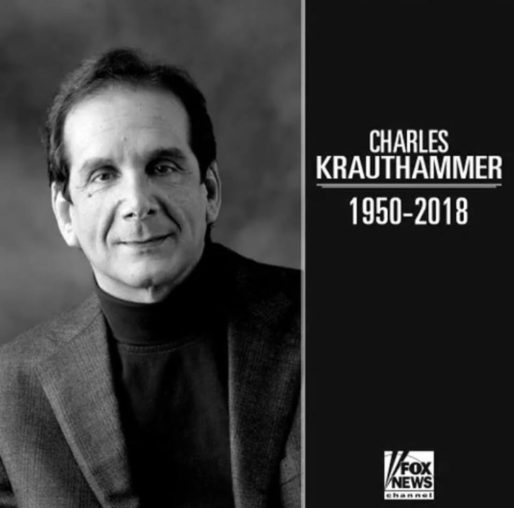 Krauthammer was born March 13, 1950 in New York City. His father was from Bolekhiv, Ukraine (then the Austro-Hungarian Empire) and his mother from Belgium. The family spoke French and Hebrew in the home. When he was 5, the Krauthammers moved to Montreal. Through the school year they resided in Montreal, but spent the summers in Long Beach, New York. Both parents were Orthodox Jews, and he and his brother were educated at a Hebrew school.

Krauthammer was injured in a diving board accident during his first year of Harvard medical school. He sustained injuries that left him paralyzed below the neck and required him to be hospitalized for 14 months.

His death had been expected after he wrote a heartbreaking letter to colleagues, friends and viewers on June 8 that said in part “I have been uncharacteristically silent these past ten months. I had thought that silence would soon be coming to an end, but I’m afraid I must tell you now that fate has decided on a different course for me…

“Recent tests have revealed that the cancer has returned. There was no sign of it as recently as a month ago, which means it is aggressive and spreading rapidly. My doctors tell me their best estimate is that I have only a few weeks left to live. This is the final verdict. My fight is over.”