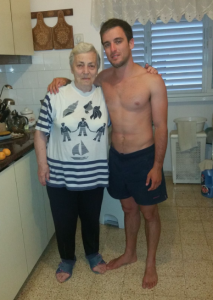 “This week, I learned what a true babushka is. This is my friend Dima Livshits and his grandmother. I never really got to know my grandparents, but this lady treated me like one of her own, and insisted on feeding me as if I had 12 stomachs. Born in Minsk, Belarus, she was denied entrance to medical school because she was Jewish. Hence, she became an engineer, and traveled all over the Soviet Union to work. Her father, an officer in the Russian military (who later perished because of his wounds), sent her and her mother to Uzbekistan to flee the nazis. The rest of the family stayed in Belarus, unconvinced that the Germans, the most civilized and cultured people at the time , would be willing to commit such an atrocity. The rest of her family perished in the Holocaust, where the children of the town were promptly drowned and the rest were marched to concentration camps. A Belarusian family (non-Jewish) hid some of her family, but they were told on by a Russian Nazi collaborator (justice came to him after the war , thank gd, and he was killed on a grave site of jews he uncovered to the Germans) who was paid by the Germans, and both the families were killed by the Nazis. While in Uzbekistan, they struggled and often went hungry, but she said the Uzbek were incredibly kind and would help with food and shelter when they could. She returned to Belarus after the war, and eventually made her way to Israel where she lives in Bat Yam today. Her grandson, Dima, an Israeli-American, will be going to medical school next year. How’s that for full circle.”