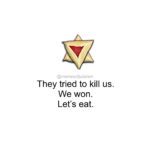 Albert Einstein was born in the German Empire on March 14, 1879. When he arrived to Hollywood in 1931, it was said that the only person he wanted to meet was Charlie Chaplin. Einstein: “What I most admire about your art, is your universality. You don’t say a word, yet […] 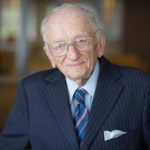 Happy 102nd Birthday to Mr. Benjamin Ferencz, the last surviving prosecutor from the Nuremberg trials. Born on March 11, 1920 to a Jewish family in the Carpathian Mountains of Transylvania, Ben Ferencz moved with his family to America when he was ten months old. After graduating Harvard Law in 1943, […] 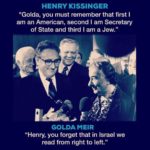 First I am a Jew

Thinking of my mother Sylvette when I watch the desperate escape of so many of the children of Ukraine. My mother left Paris for England at age 11 and was the only member in her family to get out of danger as another warmongering madman planned his invasion of Europe. […]

1956: Golda Meir In 2020, TIME magazine announced its 100 Women of the Year, which is TIME’s list of the most influential women of the past century. Photo: Burt Glinn – Magnum Photos

Mikhail Zaslavsky, pictured here by the monument for Odessa’s Jews, is one of the only known survivors of the 1941 Odessa massacre. In the early morning of October 23rd, tens of thousands of Jews were hanged, shot, and burned alive when the Romanian military and German Einsatzgruppen (SS killing squads) […]

The Chief Rabbi of Odessa, Ukraine 

In a heroic act, the Chief Rabbi of Odessa, Ukraine broke his Shabbat observance in order to bring 250 orphans from his city to safety in the midst of the ongoing violence in the country. “I told them that we are here to fulfill God’s will, and on this Shabbat, […]

Harold “Smoky” Simon, one of the first “Machalniks” (volunteers from abroad) who helped lay the foundations of the Israeli Air Force, passed away yesterday at the age of 102. After serving as a navigator and bombardier in the South African Air Force during the Second World War, “Smoky” came to […] 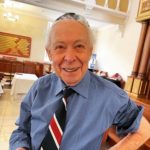 In Memory of Zaidy, Bubby and Our Entire Family 

The Nazis stole his Bar Mitzvah, now he’s finally reclaimed it! “My grandparents were from a Shtetl in Ukraine. When the pogroms began, they escaped to the Rostov region in search of safety. My grandfather – Leib – was a pious Jew. He wrapped Tefilin each morning and prayed with great vigor.When I […] 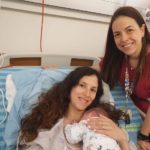 Today in Israel, Reut Globoff gave birth to a healthy baby girl on Tuesday, 2/22/22 at exactly 2:22am in room number 2. #MazalTov Source: StandWithUs 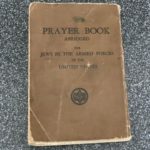 Jews in The Armed Forces

My grandfather’s prayer book provided by the United States for “Jews in the Armed Forces” during WWll. My father then used it during his time in the services during Vietnam. Source: @rachhatesyou

Judith Love Cohen, NASA engineer who helped create the Abort-Guidance System which rescued the Apollo 13 astronauts, went to work on the day she was in labor. She took a printout of a problem she was working on to the hospital. She called her boss, let him know she finished […]

Holocaust survivor Rachel Roth was born in 1926 in Warsaw, Poland. She was just 13 when the Nazis invaded and her family was confined to the Warsaw Ghetto. They hid in a secret bunker, but Rachel’s mother and three siblings were all caught and sent to their deaths. Rachel remained […] 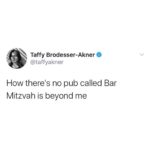 I’ll drink to that! #lchaim @taffyakner

Shoes on the Danube

During WWII, Jews in Budapest were brought to the edge of the Danube, ordered to remove their shoes, and shot, falling into the water below. 60 pairs of iron shoes now line the river’s bank, a ghostly memorial to the victims. ‘Shoes on the Danube Promenade’ by Can Togay and Gyula […]

Harry Miller is a two time Emmy award winner and Upper West Side resident. Back in the day Harry babysat for Sinatra’s kids while Frank was out singing. Harry also helped design the original It’s a Small World Ride for Walt Disney at the 1968 Worlds Fair. Last week he […] 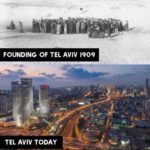 How it started > how it’s going.

“My father’s Jewish, my mother’s Jewish, I am a Jew.” Daniel Pearl’s final words 20 years ago today, February 1, 2002.The world has come to know Daniel Pearl as the Wall Street Journal reporter with American and Israeli citizenship who was kidnapped by Pakistani terrorists and murdered in Pakistan in […] 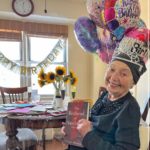 Happy Birthday to my beautiful grandma who is 96 years young today! When she was 18 years old she was in Auschwitz and all of her friends said, “we are going to heaven from here,” and she said, “you can go to heaven, I am going home from here.” 78 […] 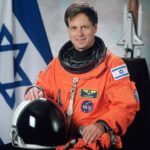 “From space, Israel looks just like it is: very small and very beautiful” – Ilan Ramon 19 years ago on February 1, 2003, we lost Colonel Ilan Ramon, an Israeli Air Force fighter pilot and Israel’s first astronaut for NASA. Ramon was the space shuttle payload specialist of STS-107, the […]

Two years ago, Holocaust survivor Vladimir Munk returned to Auschwitz for the first time since he was a prisoner there. Born in Pardubice, Czechoslovakia in 1925, Vladimir was sent to Auschwitz in October 1944 after spending two years in the Terezin Ghetto. Both of his parents were immediately murdered in […]

This is what winning looks like: Holocaust survivor Dov and his wife Jutta holding their great-grandchild, Yannai Zohar. Originally from Czechoslovakia, Dov lost his entire family in the Holocaust. He and his father Armin were both Jewish partisans who fought in the underground resistance, but Armin was murdered when the […]

Tova Friedman, Sarah Ludwig, and Mike Bornstein are three of the children pictured in an iconic photograph from the liberation of Auschwitz on January 27th, 1945. Here the three survivors are seen holding that image together over 70 years later in the United States. Source: American Society for Yad Vashem

Gerald Wittenstein, the CEO of NASA’s International Space Systems, physisist, rocket engineer who worked alongside American astronaut Neil Armstrong and is responsible for developing half of Apollo 11’s trajectories, made aliyah to Israel this week. Gerald and his wife received an emotional goodbye from Delta Airlines. The crew member then […]