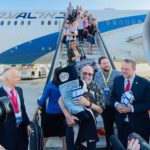 That special moment.They’ve arrived! 225 people have just moved to Israel and are brand-new citizens! The new arrivals are from a variety of backgrounds – hailing from 19 US states and 1 Canadian province. They include 99 children under the age of 17, 40 future lone soldiers, 2 National Service […] 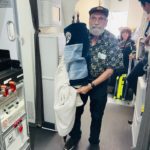 So let’s talk about the Torah on the Nefesh B’Nefesh charter flight. Esther Lauber and Alvin Reinstein moved to Israel today but not before their son gave them a very special gift. Both Esther and her husband Alvin are children of Holocaust survivors. Their son bought this special Torah that […] 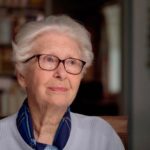 Holocaust survivor Francine Christophe was born in Paris on August 18, 1933. While attempting to flee the Nazis in 1942, Francine and her mother Marcelle were arrested and eventually deported to the Bergen-Belsen concentration camp in 1944. Marcelle kept two small pieces of chocolate for her daughter to use when […]

Israel is Where My Heart Is Artist: @bypasc

Meet Jemima Montag – an Australian racewalker and the grandchild of Holocaust survivors. Jemima is a champion in her sport; she won the gold medal in back-to-back Commonwealth Games and competed in the 2020 Olympics. But the piece of gold metal that matters most to her is not the one […]

On August 7, 2012, 18 year old Aly Raisman won the gold medal for Women’s Gymnastics Floor Routine at the London Olympics. Raisman chose ‘Hava Nagila’ as the floor music for her first place performance and became the first U.S. woman to win gold in the category. 2012 marked the […]

Western Wall at the end of Tisha B’Av

Tens of thousands of people showed up tonight at the Western Wall, marking the end of Tisha B’Av, the saddest day on the Jewish calendar. #AmYisraelChai Source: Noam Chen – Photographer | נועם חן – צלם

On one of his travels across Europe, the great French leader, Napoleon Bonaparte led his troops through a small Jewish town. He passed by a synagogue where everyone was sitting on the floor crying and reading little books by the light of small candles. Napoleon asked his aide, “What is […]

85 year old grandmother, Arlyne Frankel fulfilled 3 of her lifelong dreams: She traveled to Israel for her 70th birthday and volunteered in the Israeli Army, she celebrated her bat mitzvah at 80 years old; and this week she graduated college, from FIU, with honors! “Never give up, it’s never […]

Did you know that legendary American jazz singer Tony Bennett captured Nazis and liberated a concentration camp!? Drafted into the Army in 1944, Cpl. Bennett was assigned to the 255th Infantry Regiment of the 63rd Division. His team moved through France into Germany, where they fought on the front lines. […] 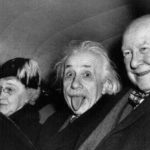 Recognize this photo? Here’s the story behind it. On March 14, 1951, Albert Einstein’s 72nd birthday, United Press photographer Arthur Sasse was trying to persuade him to smile for the camera, but having smiled for photographers many times that day, Einstein stuck out his tongue instead. Editors were initially reluctant […]

Japanese diplomat Chiune Sugihara and his wife Yukiko spent 18-20 hours a day writing and signing transit visas by hand in Lithuania for more than 6,000 Jews for 29 days from July 31 to August 28, 1940. When it was time for them to depart, Sugihara said, “Please forgive me. […] 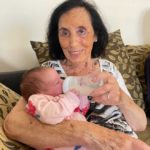 Originally from Hungary, Eva miraculously survived the Holocaust as a young girl. Her mother told all five children that no matter what happened they would meet in Israel after the war. They did. Eva married fellow Hungarian Tibor in Netanya, Israel and raised two beautiful children. Today she is a […]

Vladimir, my 92 year old friend, has a place of honor in Jewish and human history.During World War II, when Jews across Europe became a living target, Vladimir and his family hid and fed an entire Jewish family for two and a half years!And this is despite, they did not […]

He is best known for his sitcom roles on Seinfeld and The Big Bang Theory, but did you know that actor Brian George was born in Jerusalem? Both of his parents immigrated to Israel from India. His father was born in Lebanon, grew up in Bombay and of Baghdadi Jewish […]

Who knew! Elizabeth Taylor visited the Western Wall during her trip to Israel in August 1975. Photo: David Rubinger

Beautiful moment at the Maccabiah Fun Run today. 86 year old Shaul Ladany completed the half marathon in 4 hours, 27 minutes. The two-time Olympian and Holocaust survivor represented Israel at the 1972 Olympics. He holds the world record in the 50-mile walk, and the Israeli national record in the […]

This past weekend marked the 80th anniversary of the Vél d’Hiv Roundup. On July 16, 1942, the French police began a mass roundup of foreign Jews living in Paris and its surrounding suburbs. Over the course of two days, more than 13,000 Jews were arrested and held in the Vélodrome […] 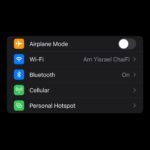 Who knew! The inventor of the slow cooker Crock Pot was Jewish! Bring on the Cholent!Irving Naxon (born Irving Nachumsohn) invented the crock pot, the then-called Naxon Beanery. He retired in 1971 and sold his business to Rival Manufacturing. They streamlined the design, renamed it the crock pot.It all started […] 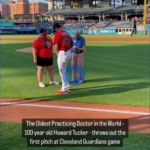 39 People Making Waves Across the Jewish Media Landscape.  A look at the faces whose work is moving the Jewish media world forward. 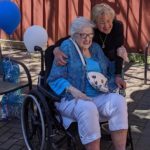 Mother and daughter reunite after 80 years apart! In 1939, Gerda Cole an only child living in Vienna, was sent by her parents to England for safety. In 1942 at just 18 years old, Gerda had to give away her newborn daughter, as she was a Jewish refugee at the […]