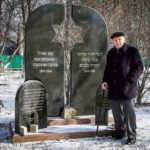 The Odessa massacre took place 80 years ago on October 23, 1941. Mikhail Zaslavsky, who is pictured here by the monument for Odessa’s Jews, is one of the only known survivors. One week after Romanian and German troops took over the Ukrainian city, the Soviets blew up the Romanian army […]