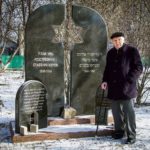 The Odessa massacre took place on October 23, 1941. Mikhail Zaslavsky, who is pictured here by the monument for Odessa’s Jews, is one of the only known survivors. One week after Romanian and German troops took over the Ukrainian city, the Soviets blew up the Romanian army headquarters, killing 67 […] 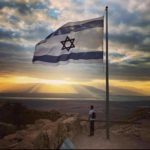 The flag of Israel was adopted on this day October 28, 1948, five months after the establishment of the State of Israel. The blue stripes are intended to symbolize the stripes on a tallit, the traditional Jewish prayer shawl. The Star of David is a widely acknowledged symbol of the […]