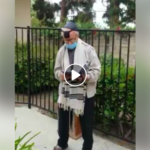 He survived the Spanish Flu of 1918! 102 year old Dr. Reuben Goodkin led the services and recited the Kaddish this morning in honor of his father’s yahrtzeit (anniversary of passing) at our outdoor “socially distanced” Minyan…Yes times are challenging but we persevere! ?Am Yisroel Chai! Source: Dov Muchnik Chabad of Camarillo

On Einstein’s 72nd birthday on March 14, 1951, United Press photographer Arthur Sasse was trying to persuade him to smile for the camera, but having smiled for photographers many times that day, Einstein stuck out his tongue instead. Editors were initially reluctant to publish it, however once they did Einstein […]