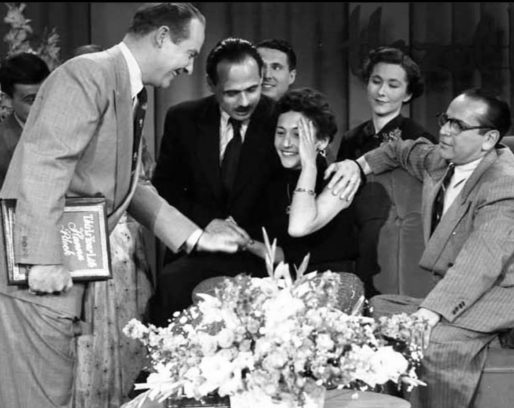 In 1953, Hanna Bloch Kohner became the first Holocaust survivor living in the US to share her personal story with American television audiences. During a live broadcast of “This Is Your Life,” host Ralph Edwards reunited Hanna with former friends from Europe, a G.I. who helped her after liberation, and her brother Friedl, whom she hadn’t seen since before the war. Born in Czechoslovakia in 1919, Hanna survived a series of concentration camps, including Westerbork, Theresienstadt, Auschwitz, and Mauthausen. When she was liberated from Mauthausen in May 1945, Hanna asked one of the American soldiers to send a letter to someone in Los Angeles. The letter was for Walter Kohner, Hanna’s fiancé before the war. Walter had left for the US and tried in vain to bring Hanna over. By the end of the war, Walter had returned to Europe as a Staff Sergeant in the US Army and tracked down his sweetheart. The couple settled in LA, where Walter, a Hollywood agent, had met Edwards. When Edwards heard about Hanna’s story, he decided to feature her on his program, making her the first Holocaust survivor whose story became widely known in this country.