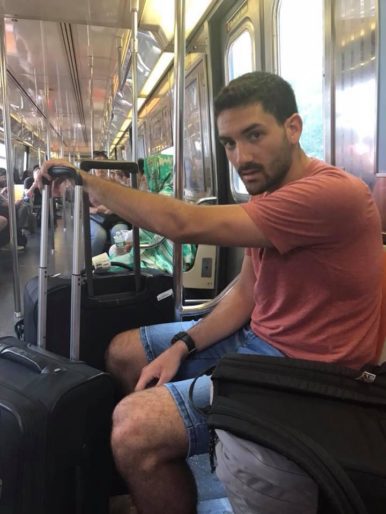 “… Just as I was waiting to get on Manhattan bound express train, from the Kings Highway station , the platform was filling up with more and more passengers..
The train took longer and everyone was getting antsy (NewYorkers – tough crowd))) Finally far away there were lights indicating that the trains were approaching.
With a sigh of relief people started to gether closer to the platform.
All of a sudden everyone heard a woman’s high pitched voice, screaming as she was pointing to the other platform. A man fell unconscious right on the tracks! Horrified that the train was approaching with a deadly speed completely unaware of the situation everyone just stood there in disbelief.. Until this kid.. you could just see his eyes, and his mind calculating the distance before the train hits the poor man, and without further ado, leaving his bags, he jumped down and pulled the man up back to the platform.. Steven Spielberg couldn’t have done it better! Then he jumped up, took his bags as if he did nothing extraordinary and got on to the Manhattan bound B train heavily falling into a seat perhaps realizing at that moment he could have lost his life along with that poor mans.. little beets of sweat were shining on his face and his hands trembled a little. We sat next to each other and I asked him if he was ok patting him on his shoulder. He just smiled and closed his eyes.. I always believed that New York has the best people- forget the attitude! But I don’t know if he even was a New Yorker. Or an immigrant from some far away land or what. He was a mother’s son, or brother maybe, or an orphan- who the f*ck cares! His courage was outstanding and he acted like a true hero. Not saying a word! Not waiting for a thank you. That man will never know who was his guardian angel pulling him from those tracks!
As we were leaving the station he turned to me and said: “ My name is Shye, and I’m from Israel, smiled and melted in to the crowd.. only in NY)))”