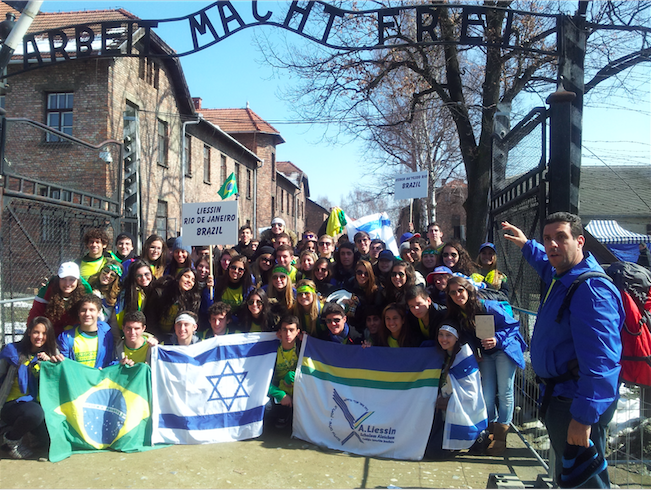 My name is Deborah, I’m 18 years old, I’m jewish and I’m from Brazil. My grandfather was a survivor from a concentration camp in France, and my grandmother left to Brazil a few weeks before the II World War. I have studied in a jewsih school all my life and two years ago I went to the March Of The Living. It was a once in a lifetime experience, It was a trip i will never forget. When I arrived i wrote this text telling how i was feeling, and this trip has changed me. I don’t know if will post but i just wanted to share.
I still can’t believe that I went to Poland that I visited all the concentration camps that I could see with my own eyes what I had been learning since childhood: the holocaust. I am the granddaughter of survivors so this theme touches me very much I think that I still can not believe because I’ll never be able to understand how thousands of Jews were killed only because they were Jews, because they were treated like dirt, because in that case no animal deserves to be treated that way, inhumane. In the whole trip I was questioning many things, trying to understand but it was really difficult! I think the more I keep trying to find out no one will ever answer me. I tried to understand how people had managed to survive, when we were there it was spring but it was really cold and all of us were with clothes for the cold so how did the jews with inappropriate cloths for the cold survived? How it must be the feeling of not having family and friends to support you? How it must be the feeling of not knowing anything about tomorrow? How It must be the feeling of seeing their mates being shot in front of you? How it must be the feeling of someone else and not you to go to the gas chamber (the death chamber)? How it must be the feeling of you being alive between thousands of dead bodies in ditches in lupochowa and you besides being weak and impaired not knowing where you will go next? How it must be the feeling at the end of the war when you have been one of the only ones who survived and not stop to question why others might not have had the opportunity that you had to survive? These are questions that I think will never have an answer, will always stay in my head pounding.
In poland I was anxious that this could happen again but when I arrived in Israel I saw that it would be practically impossible because now we have a wonderful country, super developed, technological a united nation where everyone is proud of her homeland and mainly is proud of being Jewish! A country that I know I can count on whenever I need! A country where we celebrate independence all together, walking in the street singing, dancing. But also in time of sadness come together to ring the bell in memory of the soldiers or victims of attacks or who fought in the wars! And a country that literally together in joy and sorrow!

The march itself was a unique experience where Jews from all around the world marched from Auschwitz to Birkenau FOR LIFE, which was once called Death march! We show the world that we are a united people we’re together no matter the distance something will always come together no matter what! In israel we march toward the kotel! We marched because we could survive after all and we managed to reach the promised land!
I left Israel feeling another person, feeling proud to be Jewish and that want to pass this culture, the history to the next generations . this trip made me reflect on many things that I had never stopped to think about but it made me more mature with another head, I consider myself a very lucky person to have had the opportunity to have personally heard stories of survivors because we are the last generation that will have this opportunity! but if it depends on me my great grandchildren will know and never forget the holocaust! and we will always say AM ISRAEL CHAI.
– Deborah Milsztajn

HUMANS of JUDAISM
Tagged with: Auschwitz, Brazil, Holocaust, March of The Living