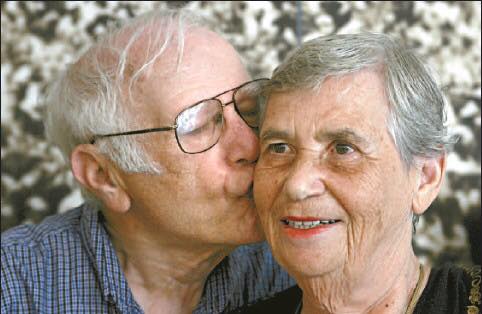 #nationalsiblingday ♥️ After decades of believing that most of her immediate family had perished in the Holocaust, Hilda Shlick (née Glasberg) was reunited with her brother Simon Glasberg in 2006. The family was separated when the Nazis invaded their hometown of Chernowitz, Romania in 1941. Hilda and her older sister escaped to Uzbekistan while their parents and other siblings hid in Romania. After the war, they were unable to find each other until Hilda’s grandsons searched Yad Vashem: World Holocaust Center,’s online Names Database and discovered they had family living in Canada. Simon travelled to Israel to be reunited with his baby sister. He said, “l waited 65 years to give her a kiss.”