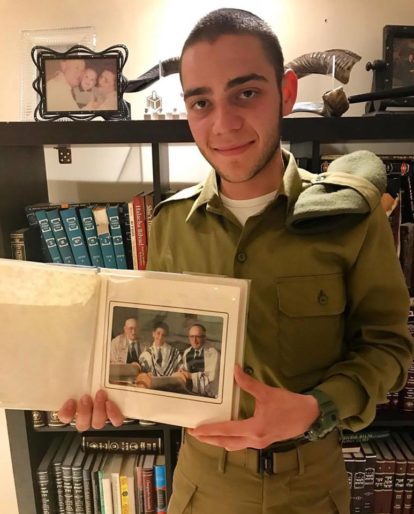 “On #Kristallnacht, November 10, 1938, Joseph Mayer was arrested by the SS in Prenzlau, #Germany and taken to the Sachsenhausen Concentration Camp. Although Joseph and his wife Anne miraculously survived and were able to leave Germany before the war began, all of their relatives perished. They died because they had no where to go, no country to shelter them and no army to protect them. Today, for the first time we see our son, Yosef Mayer, Joseph Mayer’s great-grandson proudly wear the uniform of צבא הגנה לישראל, the #IDF. If only we had צה״ל in 1938, maybe the 6 million would have been saved. When I say #NeverAgain, this is what I mean. Yosef is our answer to the #Holocaust. – Elie Mayer