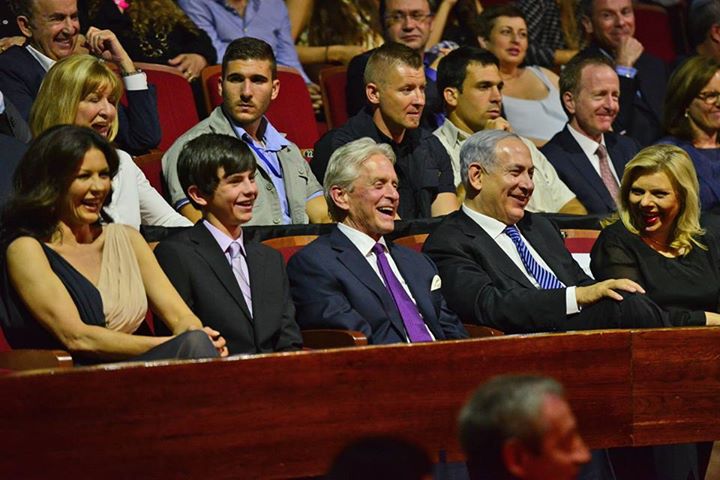 “Last night I presented Michael Douglas with the 2015 Genesis Prize. Michael won the prize not only because of his professional achievements, but also because of his connection to Jewish tradition, his love for the Jewish people, and his passion for the Jewish state.
Michael is a true friend of Israel. He has used his public influence to take a clear stand against anti-Semitism, and he has correctly described the BDS movement as an “ugly cancer.”
Indeed, rather than suppressing his Jewish identity, Michael has embraced it – and encouraged his family to do the same. I was moved by his son Dylan’s desire to celebrate his Bar Mitzvah in Israel, and I look forward to welcoming the entire family again to Jerusalem when his daughter Carys celebrates her Bat Mitzvah here.
Michael plans to direct his prize money to organizations that promote inclusiveness and diversity in Judaism. I want to emphasize: As Prime Minister of Israel, I’m committed to strengthening the unity of the Jewish people, and I will continue to reject any attempt to divide the Jewish people and to delegitimize any Jewish community. Everyone is welcome in Israel – Reform, Conservative, Orthodox alike. Everyone.
Michael, I applaud you for all of your accomplishments, and for the impact you will certainly have in the years ahead in fulfilling your role as a Genesis Laureate. I applaud you for coming to Jerusalem, our capital for 3,000 years, where we are shaping our future while remembering our past. I applaud you – and I think this the most important thing – for setting an example to Jews everywhere to stand tall and stand proud.
Shabbat shalom.
Photo: Kobi Gideon, GPO”