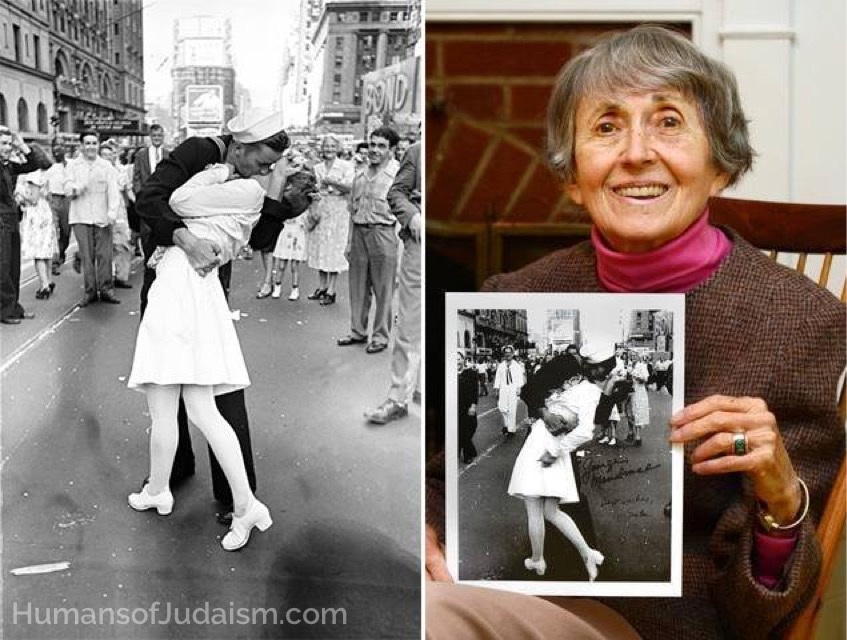 Although Alfred Eisenstaedt’s photo quickly became an iconic symbol of the euphoria marking the end of WWII, for decades no one knew the identify of either the nurse or the sailor pictured nor did the two know about its existence. It wasn’t until 2012 that author Lawrence Verria conclusively proved that it was Friedman, then a 21-year-old dental assistant, and sailor George Mendonsa photographed kissing in Times Square. In a recent interview, Friedman recalled the exuberance of the celebrations: “It was all good news, the best news we’d had for a number of years.”

Friedman was born in Austria in 1924; she and her two younger sisters were among the last Jews able to escape the country before it was annexed by Nazi Germany in 1938. The three girls emigrated to the U.S. and, although their parents had planned to follow soon after, they were arrested and died in concentration camps during the Holocaust. On the morning of August 14, 1945, more commonly known as V-J Day, Friedman heard rumors of the Japanese surrender and went out to investigate. She was in Times Square when a sailor on leave, who was later identified as Mendonsa, grabbed and kissed her — and Eisenstaedt captured the now-famous image.

Friedman first saw the picture, which was originally published in Life magazine, in a book in the 1960s and contacted the magazine. At the time, it wasn’t interested in her story, but in 1980, Life asked the sailor and nurse to come forward. They were flooded with so many claims that it would take another three decades before Verria’s book “The Kissing Sailor: The Mystery Behind the Photo that Ended World War II” proved their identities.

In recent years, the picture has increasingly sparked discussions around issues of consent as the circumstances around the kiss have come to light. In a 2005 interview, Friedman said, “It wasn’t my choice to be kissed. The guy just came over and grabbed! That man was very strong. I wasn’t kissing him. He was kissing me.” Verria, who got to know both Friedman and Mendonsa well while writing his book, said that they felt there was a middle ground: “Calling it a sexual assault caught on film is not accurate, but also viewing the kiss as romantic as it’s often characterized is not accurate.” In speaking about the debate recently, Friedman’s son, Joshua, observed that his mother shared the concerns about lack of consent but did not bear any ill will toward Mendonsa: ‘My mom always had an appreciation for a feminist viewpoint, and understood the premise that you don’t have a right to be intimate with a stranger on the street. [But] she didn’t assign any bad motives to George in that circumstance, that situation, that time.”