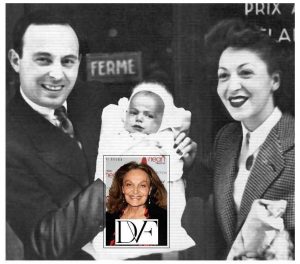 Iconic fashion designer Diane von Fürstenberg has published a new memoir, titled “The Woman I Wanted to Be,” which covers many of the themes that have filled her life.
Von Furstenberg’s mom, Liliane Nahmias, married just six months after emerging from internment at Auschwitz. Diane was the child she never thought she could have, and her mother often said that she survived so she could give life to her daughter. The designer recalled her saying, “You are my torch of freedom,” then added, “[A]s my mother is no longer here, I realized that actually that explains so much the woman that I am and the woman that I became.”
“I used to feel great admiration watching my mother get dressed to go out she looked at herself in the mirror with a smile of confidence,” the fashion designer wrote.
Von Fürstenberg said, “If I ever feel too lazy to do a chore, if I hesitate to go out because of the cold, I remember my mother.”
According to an article in InStyle magazine, von Fürstenberg carried the words of her mother, and it motivated her to be free with her life. The Daily Beast has also reported that von Fürstenberg’s book was originally a series of essays involving her mother. However, later she turned the book into a memoir.
Photo of Fürstenberg and her parents – inset an updated photo of the designed and her label
#HolocaustRemembranceDay #April16