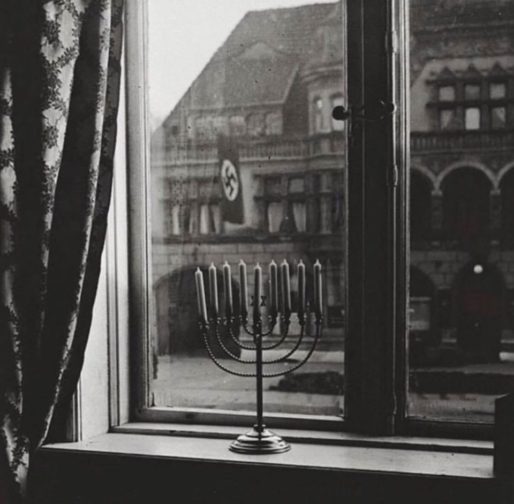 Chanukah 1931
“It was on a Friday afternoon right before Shabbat that this photo was taken. My grandmother realized that this was a historic photo, and she wrote on the back of the photo that ‘their flag wishes to see the death of Judah, but Judah will always survive, and our light will outlast their flag.’ My grandfather, the rabbi of the Kiel community, was making many speeches, both to Jews andGermans. To the Germans he warned that the road they were embarking on was not good for Jews or Germans, and to the Jews he warned that something terrible was brewing, and they would do well to leave Germany. My grandfather fled Germany in 1933, and moved to Israel. His community came to the train station to see him off, and before departed he urged his people to flee Germany while there’s still time.” – Yehudah Mansbuch

✨Written on the back of the photo: “Chanukah, 5692. ‘Judea dies’, thus says the banner. ‘Judea will live forever’, thus respond the lights”.