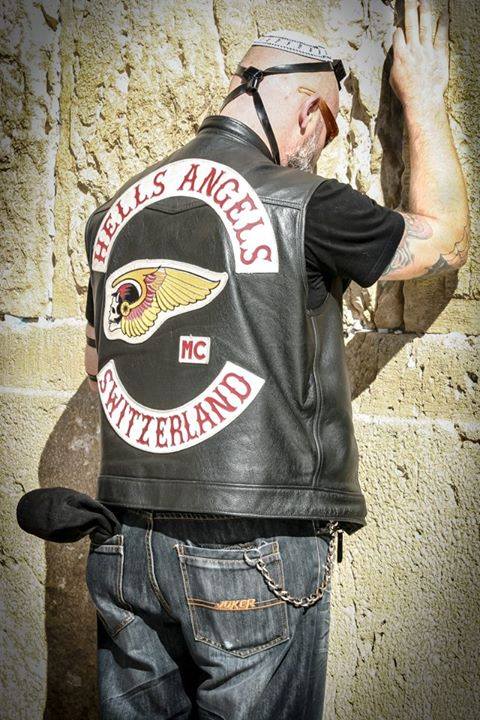 “B”H He slowly and deliberately approached the Kotel. For over a half an hour he fervently prayed, not wearing Teffilin. Being very curious what a Hells Angel prays for. I patiently waited till he would step back and turn around. When we made eye contact, I politely asked him in English if he mind sharing with me what a Swiss Hells Angel prays for. He smiled a very broad smile and in perfect Israeli Hebrew began to relate. His name, he said was Yerachmiel, was Israeli and Jewish. He continued to share that the last time he was at the Kotel was on his Bar Mitzvah, and that was the last time that he put on Teffilin. I politely and with a sincere smile asked him if at this time he would consider putting on teffilin. He smilingly answered that he would be happy and proud to do so. As to what he was praying, he tearfully answered “my parents, my wife and 2 children and little for myself”. We than went to the Chabad Teffilin stand at the Kotel and he politely asked for some assistance. Having put on the Teffilin he picked up a prayer book and slowly and very deliberately went to the same spot where I first saw him praying. I couldn’t believe my eyes. He then spent over a half an hour more fervently and emotionally caressing the Kotel stones than the first time.
A week later he Emailed me asking if I could sent him some photos and an address of a Chabad Rabbi in Switzerland. I complied immediately, also adding some blessings for the physical and spiritual well being of his parents,wife and children.”
Source: Moshe Schlass