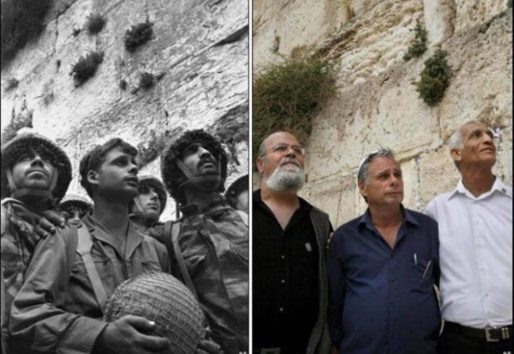 In June 1967, Israeli paratroopers broke through Jerusalem in the 6-day-war ending decades of oppression against Jews in the Holy City. Here in this iconic photo, the three paratroopers who were photographed standing at the Western Wall are pictured together again 50 years later.

This combination of pictures created on May 11, 2017 shows a file photo (L) released by the Government Press Office (GPO) and taken on June 7, 1967 of then Israeli paratroopers Tzion Karasenti (L), Yitzhak Yifat (C) and Chaim Oshri (R) standing next to the Western Wall, in Jerusalem’s Old City. Photo Credit: AFP