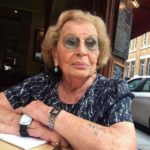 Happy 95th birthday to Holocaust survivor Julia Wallach!! Julia was born in Paris, France on June 14, 1925. Nazi troops entered the city on that same day in 1940. Julia hid with her father until they were arrested in 1943 and sent to the Drancy internment camp. She survived Auschwitz-Birkenau […]